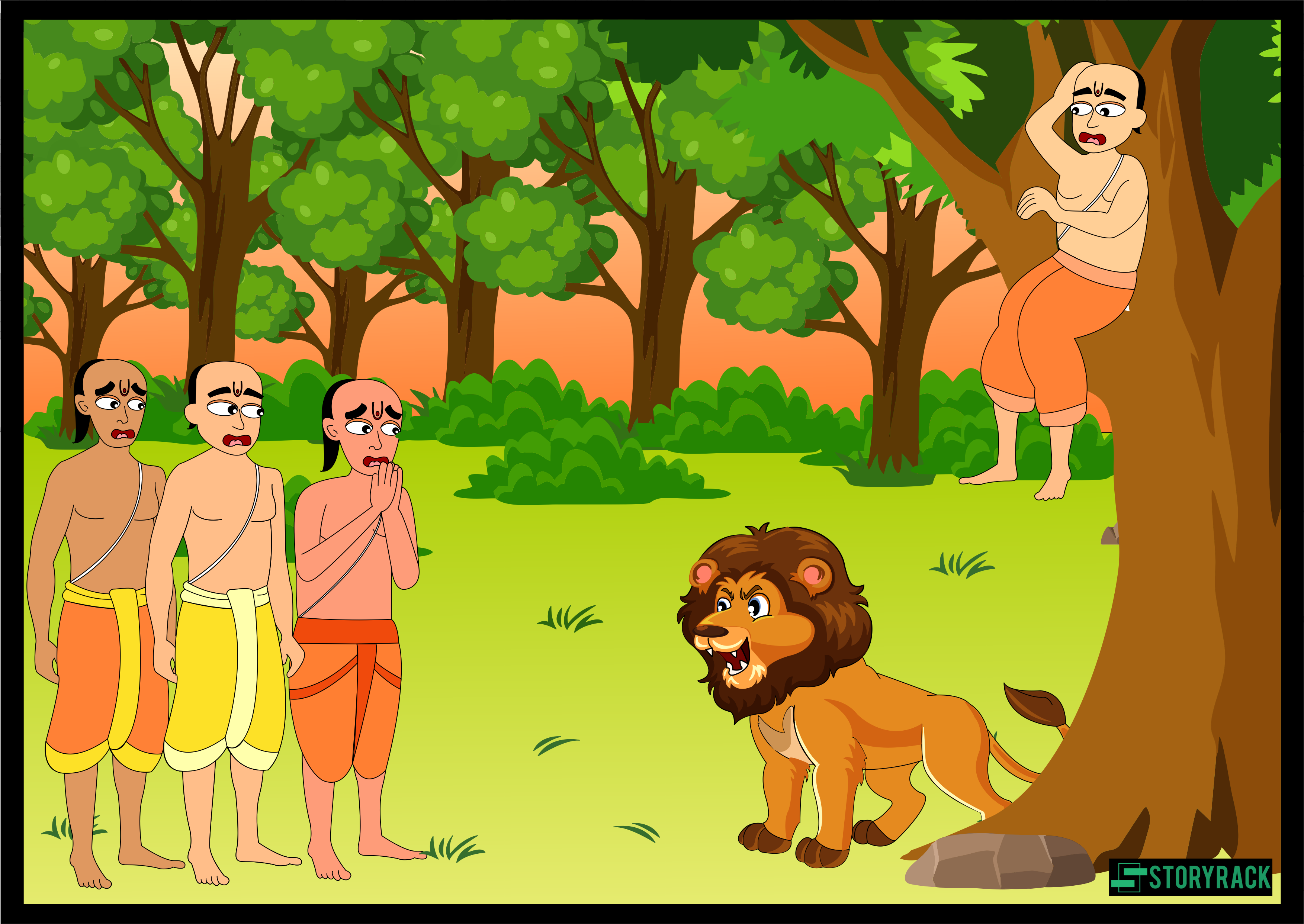 This is the story of four Brahmin friends. Som, fish, Jeevan, and buds. They lived together in a small village. All four of them were the students of a sage who lived in the forest. The sage was a simple but a very learned man. The brahmins respected their teacher. Every day, they would listen to their teacher very carefully. “My children, anybody can become learned, but skills alone will not take you anywhere. You have to learn to use it wisely.”

Som, fish and Jeevan learned many skills. Vesh could heal a wound without touching it. Som could mend a broken pot. Jeevan, could take a fallen dead leaf and attach it back to the tree. But Budh was the slowest among all. He could not do any of these things.

The three friends would always make jokes on Budh. AAAh! Come on, pot mend! Budh has learned a new skill! He can talk to the broken pieces of a pot. Oh, yes! but the broken pieces have not learned the skill to mend! Poorly broken pot! but Budh never complained. Guruji! What do you mean by common-sense? that’s easy. Common sense is when we think before we act.

One day, Som, Vesh, and Jeevan decided to travel out of the village. “This village is too small. We will never be the most learned men if we live here for the rest of our lives. We should travel to learn more.” I agree one of the friends replied. We have gathered all the skills we can. Now we should move on. What about Budh? Should we talk to him too? Oh! He is stupid and useless! He will only be a burden upon us. No, Vesh. We are stronger than him. It is our duty to protect him. We must invite him to come along with us.

They all gathered their clothes and food and prepared for their journey. Remember children, a wise man always thinks before he acts. We will remember, Guruji. The Brahmins waved goodbye to their teacher after walking for half a day, they were tired and wanted to rest. Let us eat our lunch here. A wise man always store their energies for coming adventures as they were about to sit on the rock, Budh saw something lying on the ground.

Oh! What is that? Oh, Budh! Are you going to be afraid of a pile of bones now? I wonder whose bones are these? I can guarantee you that these belong to a lion. He must have died of hunger. A lion? Yes! Look at the structure of these bones. I am sure these are a lion’s bones. Oh, wait! Why don’t test my skills on him? What good way to practice! I will rearrange this pile into a skeleton of a lion!what? Before anybody could say anything, Som started to chant some words. Suddenly there was a bright light on the pile of bones, and it was rearranged into a skeleton of a lion!

The three brothers were surprised! See! Didn’t tell you? You have to be as learned as I am to do it! You think your skill is the greatest? I can put flesh back into this lion. He will have fur, skin, nails, teeth everything only in a few minutes! Nails!!, teeth!! Fish don’t but wish had stopped listening. He was now chanting some words. Suddenly, the skeleton had eyes, skin, fur, nails and much more. It was now a fully made lion lying dead on the ground!

Isn’t beautiful? It’s scary! Why did you do that? Because only I can! With my skill, I can bring anything back. The lion had lost his skin and body! I brought it back! isn’t this the greatest skill? Hahaha! You think only you can bring something back? don’t you know what skill I have learned? I can bring this dead lion back to life! what! Yes, Budh! Who do you think is most learned then? He can’t decide just by your words, Jeevan. Do it and show him then he will decide who is the most learned. I don’t know about the most learned. But I know who is the strongest! The lion! don’t do this, Jeevan. Please listen to me…while all my friends have tested their skills, you don’t want me to test mine? Would you call yourself a good friend? Vesh was right! We should have left you back in the village. But…Guruji said…you will teach us what Guruji said? You? Who never learned any skill? You don’t trust your friends, do you? You are right, Jeevan. He has not learned a single skill. How would he know the importance of practice? Budh, just because you don’t have any skill to show us, you don’t want us to test ours? You are jealous of us!

Oh! I do have one skill which is enough to save my life. Common sense is when we think before we act. Oh!oh! don’t be so angry, my friends! I will not stop you now. But before you start, let me climb onto a tree. If the lion eats me, how will I tell you who is the most learned one? HAHAHA! You are a coward! You must brave any situation! I will not lie to my friends. But I can’t fight a lion! And I will have a better view of the tree. I can decide clearly who is the most learned.

Budh quickly climbed onto a nearby tree as Jeevan started chanting some words. Within a minutes, a bright light appeared upon the dead lion. And he opened his eyes! The three brahmins jumped happily! They had now proved their skills! But their smiles were soon gone. The lion got up and roared angrily! Run! The lion is alive! Save yourselves. But the Brahmins were so scared, they could not move.

The hungry lion leaped on the Brahmins at once! The poor Brahmins could not do anything to save themselves. The lion ate all the three Brahmins one by one. Budh was sitting on the tree watching everything. After the lion left, Budh climbed down from the tree. He saw that there were only bones left of his friends. You were all learned. But if only you had remembered Guruji’s last message, you would not have met this fate.

A WISE MAN ALWAYS THINKS BEFORE HE ACTS.