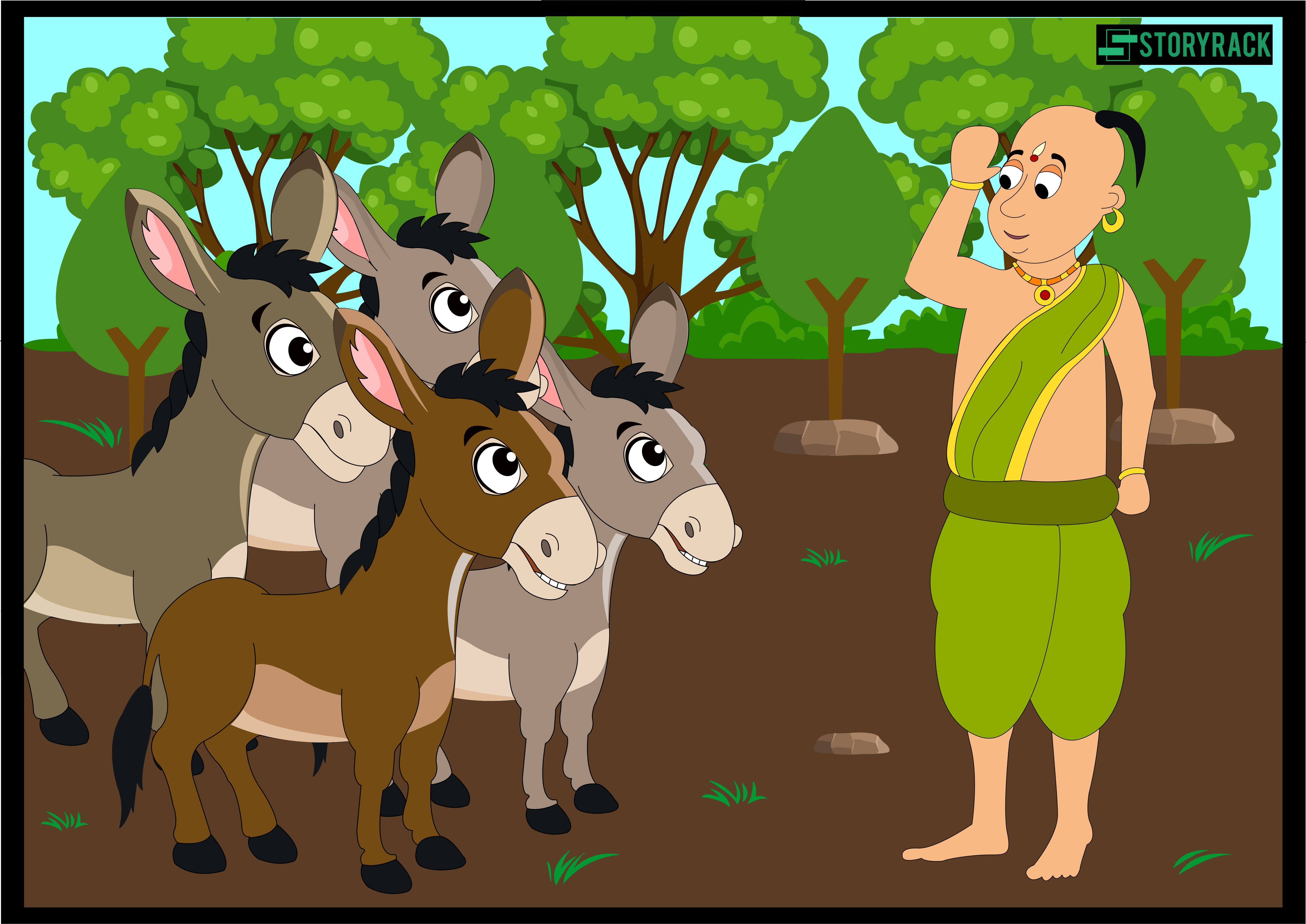 In the Royal Court of King Krishna Deva Raya, lived a pious man called Thathacharya. He was the, royal teacher and family priest to the king. The royal teacher had a strange habit which was greatiy disliked by most people, especially the Smarthas.

When outside his home, he would always cover his head and face with his cloak so as to avoid seeing the Smarthas in the town. The entire kingdom wondered why he hated the marthas so much. This behaviour of his annoyed and irritated the learned Smarthas. The Smarthas, however, were scared to go and speak about this to the king as they thought he might get angry without them for complaining against the royal teacher.

So, instead of going directly to the king, they approached his favourite minister, Tenali Rama.

Upon meeting Tenali, they explained the situation to the wise minister, hoping that he would find out a way to stop this foolishness.

“The royal teacher treats us with hatred,” said one of the Smarthas.

“We are all here to discuss a problem with you concerning Thathacharya, the royal teacher. The royal teacher has been behaving very badly towards the Smarthas and has been humiliating us regularly. We dare not go to the king directly as he may get angry if we talk about Thathacharya,” said Dhurjhati, a Smartha

Tenali Rama too, had noticed the behaviour of Thathacharya and did not approve of it. He was happy that some people at last had spoken against him and his cruel behaviour.

Assuring them he said, I’ll do my best to solve this problem. I too feel that everyone should respect each other in this kingdom. I will speak to the king about it soon,” said Tenali convincing the Smarthas.

“You have to think of a way to end this. I am very disappointed with Thathacharya. He is the royal teacher and he treats others with humiliation,” said the king in a low voice.

“You should be very careful in solving this case Tenali. Thathacharya is learned respected. No one should know that I have appointed you to teach him a lesson for looking down upon the Smarthas,” ordered the king. “ won’t fail you, Your Maje guaranteed Tenali as he walked away, thinking of a way to end the problem.

Next morning, Tenali Rama got dressed and left for Thathacharya’s house. As he was entering the gates, he saw the royal teacher stepping out of his door. Noticing Tenali Thathacharya fumbled for his cloak to cover his face and head. “Hello Master I’m your favourite disciple. Why are you covering your face?” Tenali said insistently.

“Since youu are my favourite, I will tell you a secret,” said Thathacharya whispering to Tenali Rama. “Yes Master, what is it?” Tenali asked in curiosity.

“The Smarthas are sinners. It is said that if we look at them, we will become donkeys in our next life. That is why I cover my face and head when I see them. Don’t tell this to anyone,” commanded the royal teacher. “Never,” promised Tenali as walked away

Several days passed and Tenali Rama was ansiously waiting for the right moment to teach the royal teacher a lesson. Finally, the day arrived. King Krishna Deva Raya Thathacharya and his eight competent ministers, and other reputed scholars visited a garden on the outskirts of the city.

On the way back, a herd of donkeys blocked their way. Tenali Rama decided to take advantage of the situation and sprung into action. All of a sudden, he went closer to the donkeys and started boving before the donkeys and paid homage to them. Falling to the ground, he started mumbling prayers and saluted the donkeys.

“Are you crazy? Why do you salute the donkeys?” asked the king.

“Forgive me, Your Majesty, but I am only saluting Thathacharya’s family,” Tenali replied still stooping before the donkeys.

“This donkey is Thathacharya’s brother in-law that one is his grandfather and the one with spots is his father. I feel blessed to see them all together here,” said Tenali pointing at each one of them.

“Your Majesty. The royal teacher mentioned that looking at a Smartha would make him a donkey in his next birth. You can ask him, Your Majesty.” Tenali replied in absolute admiration.

“Is that true Thathacharya?” the king asked the royal teacher, now understanding what his witty minister Tenali Rama was indicating. “Yes, it is true,” said Thathacharya bowing his head in shame.

“This kingdom is for everyone and not for you or me alone,” said the king assertively to the royal teacher.

Thathacharya asked for forgiveness and never covered his face or head when he saw a Samaratha again. The King rewarded Tenali Rama for tackling the problem with intelligence and humour.