Tenali and the Brinjals 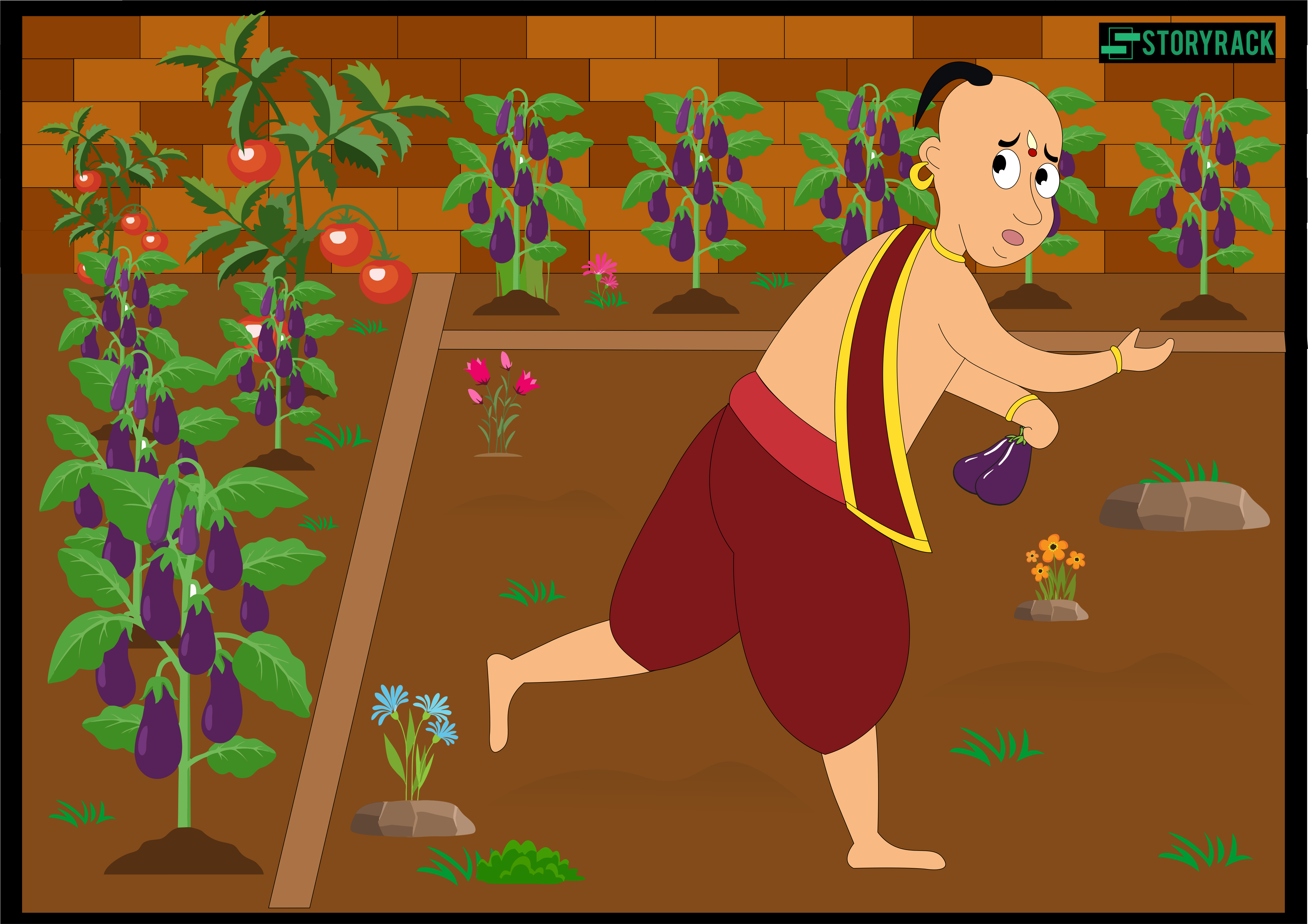 King Krishna Deva Raya had a private garden that he was very proud of. He had a variety of vegetables grown there. This time, it was a rare variety of brinjals he had got planted. One day, he invited all his ministers and courtiers to taste the delicious brinjals plucked and cooked from his garden. Everyone found them to be the tastiest brinjals they had ever had.

When Tenali returmed home, he couldn’t stop talking about the delicious brinjals to his wite-so much that evon his wife wanted to taste them.

“I too want to taste the briniuls from the king’s garden,” his wife pleaded. “How can I set them for you?” ashed Tenali “I dont care.” his wife insisted.

Tenali did not want to disappoint his wife. Knowing the consequences and the king’s wrath. Tenali Snally mustered up the courage to steal one brinjal from the King’s garden.

He climbed over the walls and managed to pluck one for his wife that night. She cooked a delicious meal and slept happily. Tenali on the other hand, sat up worrying all night.Tenali Rama’s wife enjoyed the brinjals so much that the next day she insisted that he get two more brinjals so that she could prepare enough to feed their son. “Please get two brinjals. This is the last time I shall ask you this,” she begged her husband.

“All right, but this is the last time I am going to steal for you,” said Tenali angrily.

So. Tenali Rama again went to the king’s private garden. He climbed over the walls that night again and plucked two brinjals this time. Tenali knew that the king would find out about the missing brinjals and so, quickly thought of a plan to prevent him fron finding out that it was Tenali. As his wife prepared the brinjals, Tenali ran up to the terrace and threw a bucket of water on his son who was asleep.

Carrying him inside he said. “Let us rush in my son, it is raining here.” When dinner was ready, he fed his son and put him to sleep reminding him that if he had not got him inside the house in time, he would have fallen ill because of the rain.

Next morning, the king was taking a walk in his private garden. Here, he was informed by the royal gardener, who kept count of the number of brinjals that were growing in the garden, that three brinjals were missing. The king was furious and ordered his courtiers to find the thief. Soon, news spread about the missing brinjals as the king declared a prize on the thief’s head

The chief minister was suspicious only of Tenali Rama, for there was none as daring as he was in that kingdom and only someone bold could carry out the dangerous feat of stealing from the king’s garden. He said to the king, “Your Majesty. I cannot think of anyone else but Tenali Rama, who can steal from your private garden.”

“Tenali Rama is very clever. Let us call his son. We can find out the truth from the boy as Tenali would not teach his son to lie.” When the child reached the court, the king asked the little boy, “What did you have for dinner yesterday my son?”

Tenali Rama was summoned to court and the chlef minister accused him of stealing the brinjals.”

“You have disappointed me. You could have asked me for some instead of stealing them,” said the king, angry and heartbroken.

“It is not true, Your Majesty,” repled Tenali. “My son slept early last night was having bad dreams the whole night because he has been talking rubbish since morning. He insists it rained last night,” replied Tenali almost breaking into tears.

The king turned towards the child and asked, “How was the weather last night dear son?”

“It rained heavily and I got wet because I was sleeping on the roof,” replied Tenali’s son innocently.

The chief minister and the king apologised to Tenali for having accused him of stealing the brinjals, while Tenali returned home with his son swearing never to steal again.