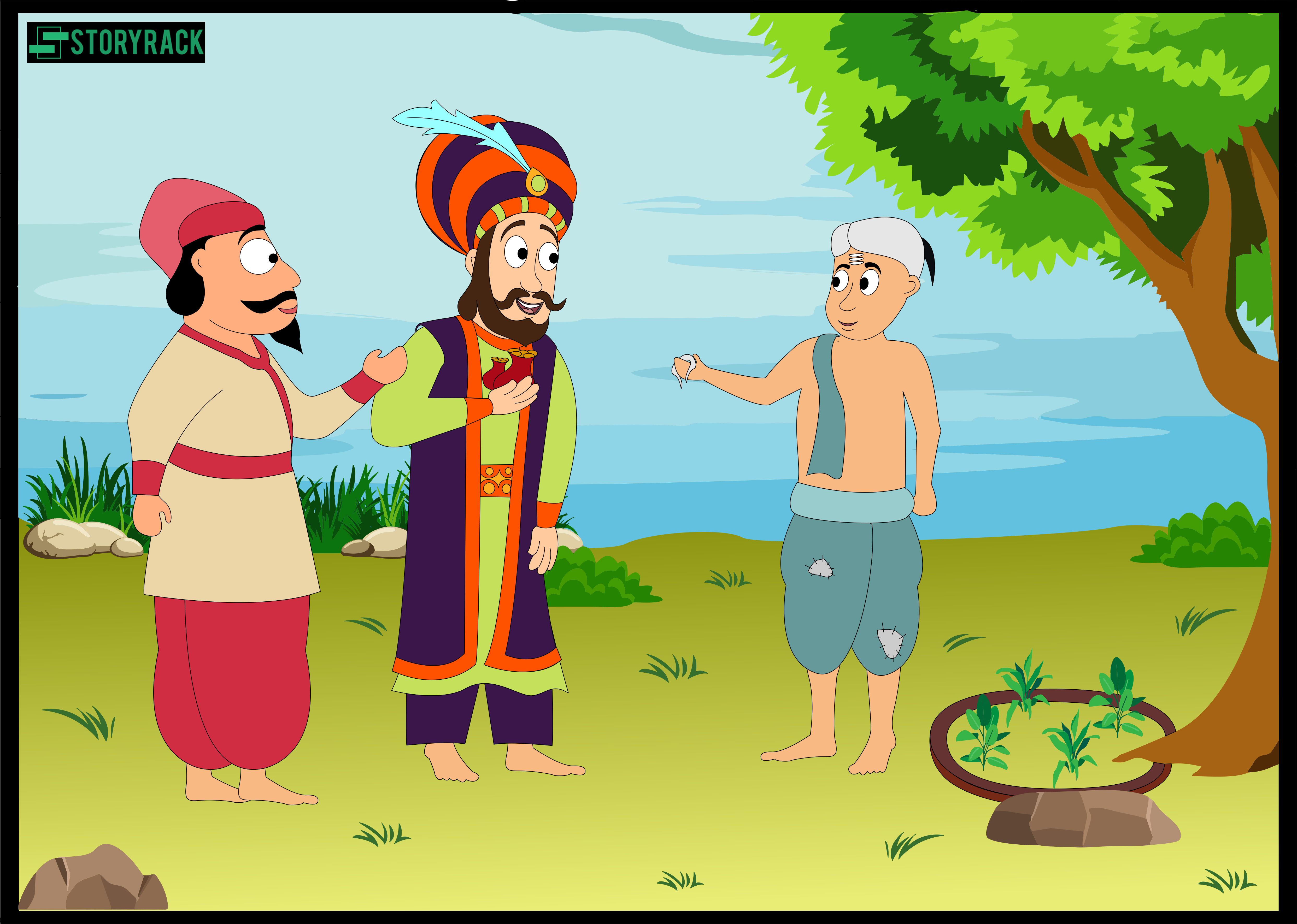 Tales of Tenali Rama ‘s quick wit and intelligence had spread far and wide and King Krishna Deva Raya was very proud to see that the eight poets or Astadigsaias of his Royal Court were extremely popular throughout the country. King Babur, the ruler of Delhi, too had heard of the stories of the Astadiggajas especially of the famous poet and court-jester of the Vijaya Nagar Kingdom,Tenali Rama.

Keen to test him, the great Mughal King invited Tenali to his kingdom. Upon receiving the invitation, King Krishna Deva Rava was pleased and sent him to visit the King immediately. “But remember,” said the king before Tenali set off for the Mughal Palace, “you must make the kingdom of Vijaya Nagar proud.” Promising his king that he would not let him down. Tenali started out on his journey.

When Tenali Rama reached Delhi, he was greeted with honour and respect at the Dahi dubr Yet, as he started narrating some stories, he noticed that there was not even a smile, let alone laughter, in the entire court. Tenali Rama was surprised to see this. All the attempts to make them laugh, through various tactics and tricks, failed.

This continued for fifteen days and Tenali Rama left drained. He was puzzled as to why the King and his courtiers would not even chuckle at his stories. He then realised that the King must have ordered his courtiers not to laugh, for it was impossible for anyone to sit tlarugh any of his tales without laughing

“Indeed,”thought Tenali Rama, “the King is trying to test me!

I must try to figure out a way to catch his attention somehow.

On the sinteenth day, instead of going to the durbar, Tenali decided to follow the king on his daily routine. He decided to do so under disguise so that the king would not konow that Tenali Rama was following him.

Tenali Rama noticed that the king went on a stroll along the banks of Yamuna River every momimg and gifted gold colns to the poor. Suddenly, a perfect plan to get the King ‘s attention once and for all, struck him. He rushed back home, excited about the plan that he would carry out the following day and sept peacefully that night.

Early next morning. Tenali went to the same spot where he had seen the king the previous day. He went disguised as an old man holding a sapling in his hands. Seeing the King coming towards him, he sprung into action and started planting the sapling.

Seeing such an old man planting a tree, the King asked him, “Old man, you won’t live long enough to enjoy the fruits of this tree you are planting!

Tenali replied, “Your Majesty, I have already enjoyed the fruits from the planted by my ancestors. This tree will bear fruits to be enjoyed by others in the future.” Impressed with his reply, King Babur gave the old ma3 of gold coins.

“Your Majesty, you are very kind. People get the fruits when the tree has grown but you have giuen me the fruit of my efforts even before I have planted the sapling.” Thriled with the old man’s words, King Babur took out another bag of gold coins and gave it to him.

Not losing a minute, the old man said, “Oh, Your Majesty, this tree will bear fruits once every year but you have filled my arms with fruits of joy twice already

Delighted with his wise words, the King gifted the old man a third bag of gold coins.

At this point, the prime minister accompanying the king realised that the old man was very wise and advised the King to proceed further lest he emptied his coffers on this man alone.

King Babur laughed and was about to walk away when the old man said. “Your Majesty, will you please give me a look?” On turning, the King and his prime minister found Tenali standing with the beard in his hands. Shocked but pleased at Tenali Rama’s prank, King Babur honoured the wise minister with many rewards and gifts and sent him back with more for his king.