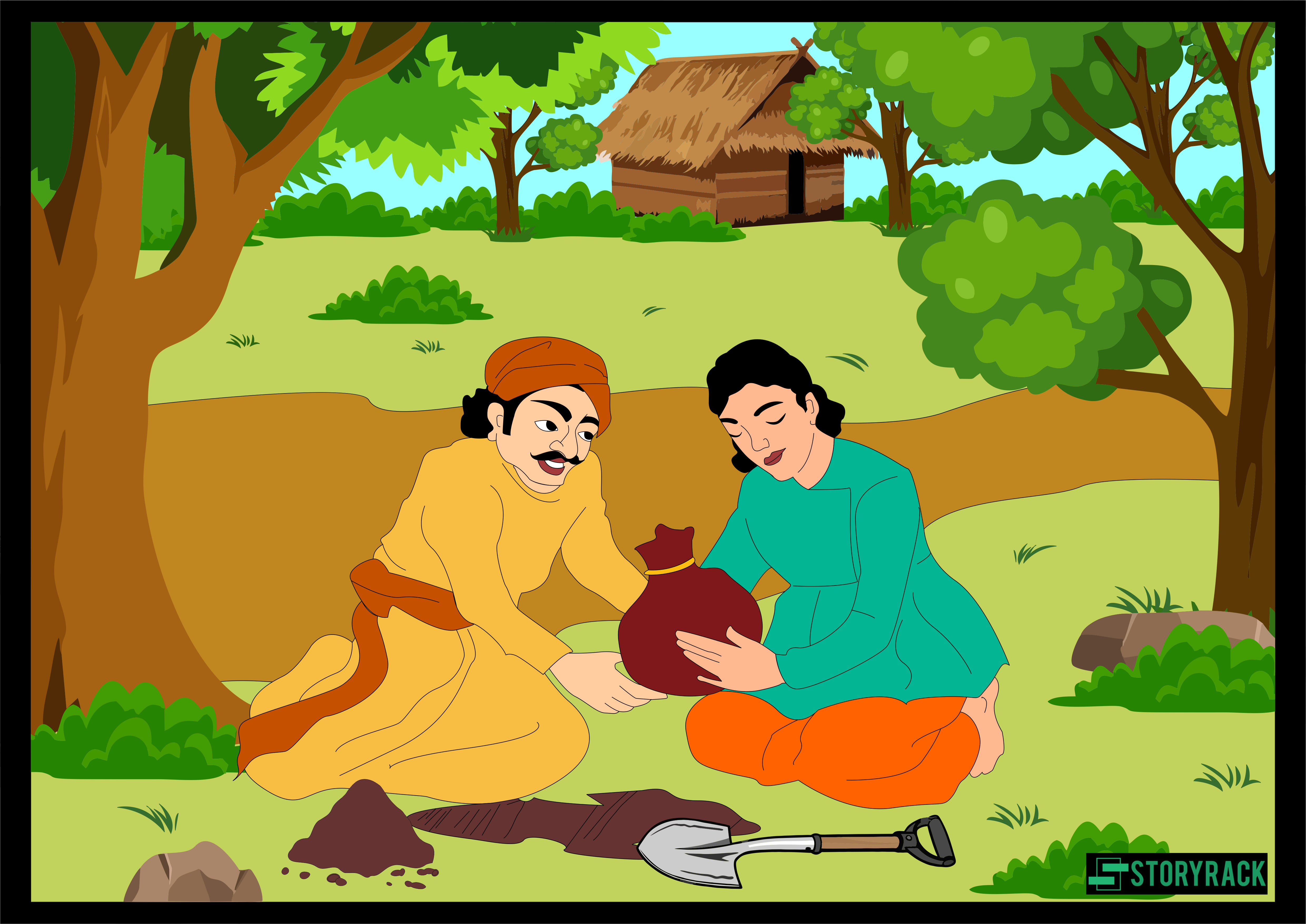 Once upon a time, there lived two friends in a village. One was called Dharma and the other was Adharma.

One day, Adharma said to himself, “I am a poor man. I should go abroad with Dharma to make a fortune.” Thinking this, he said to Dharma, “Friend, unless one goes abroad, one cannot gain knowledge or wealth.”

Dharma agreed with his friend. Both left their village and went abroad. They travelled to many countries and collected a lot of wealth. They were so happy and satisfied that they decided to return home. When they reached outskirts of their village, the Adharma said, “Friend! It will not be wise to go home with all the wealth. Our friends, relatives and neighbours may ask us for a share of our wealth. So let us bury mos of our wealth here and go home with only some of it.”

So both the friends put their wealth in a pot and buried it under a banyan tree on the outskirts of the village. They then went home and began to lead a happy life.

One midnight, when the whole village was fast asleep, Adharma got up and went to the banyan tree. He dug up the spot where they had buried their wealth, took out all the wealth, levelled the ground and returned home quietly.

The next day, Adharma went to Dharma’s house and said, “Friend! we had brought home only some of our wealth. Now I have used most of it. Let us go and bring some more wealth buried under the banyan tree.”

Dharma agreed. Dharma and Adharma went to the banyan tree. They dug up the spot, but they were shocked to see that there was nothing at the spot! Adharma accused Dharma of stealing all the wealth. He said, “Dharma! You have cheated me. You have stolen all the wealth.”

Dharma said, “Stolen wealth has no value for me. I will lay down my life, but never steal.”

But Adharma refused to listen to him. “You are a liar. You are a thief. Besides me, only you knew that the wealth was buried here.”

Both the friends had a heated argument. At last, they went to the king for justice. They narrated their story to the king.

Adharma said, “Your Highness! The god of the tree is my witness. If you ask him, he will tell you who the thief is.”

The king and his ministers became curious to know more about Adharma’s witness. After thinking for some time, the king right. Tomorrow morning, we will all go to the banyan tree under which you had buried your wealth.”

Adharma played a trick. He went home and said to his father, “I have stolen all the wealth. If you do as I say, we will have all that wealth to ourselves.”

“What do you want me to do?” asked the father.

Adharma said, “You have to hide in the big hollow in the trunk of the banyan tree. Tomorrow morning, when I ask you, you will change your voice and testify that Dharma is the thief.”

The next morning, Dharma, Adharma, the king, his ministers, and many people of the village gathered near the banyan tree.

Adharma said, “O god of the tree, you are the witness. Please tell us who the thief is.”

The god of the tree said, “Dharma is the thief.”

Everyone was stunned. The king ordered his guards to collect some firewood and dry leaves and light a fire near the tree trunk.

When the fire was lit, the smoke went into the hollow of the trunk. Adharma’s father who was in the hollow was suffocated by the smoke. When the huge flames entered the hollow, Adharma’s and father screamed with fright jumped out.

Adharma’s game was up. Everyone knew who the god of the tree really was. The king ordered the guards to imprison Adharma and his father. He qave all the wealth to Dharma.