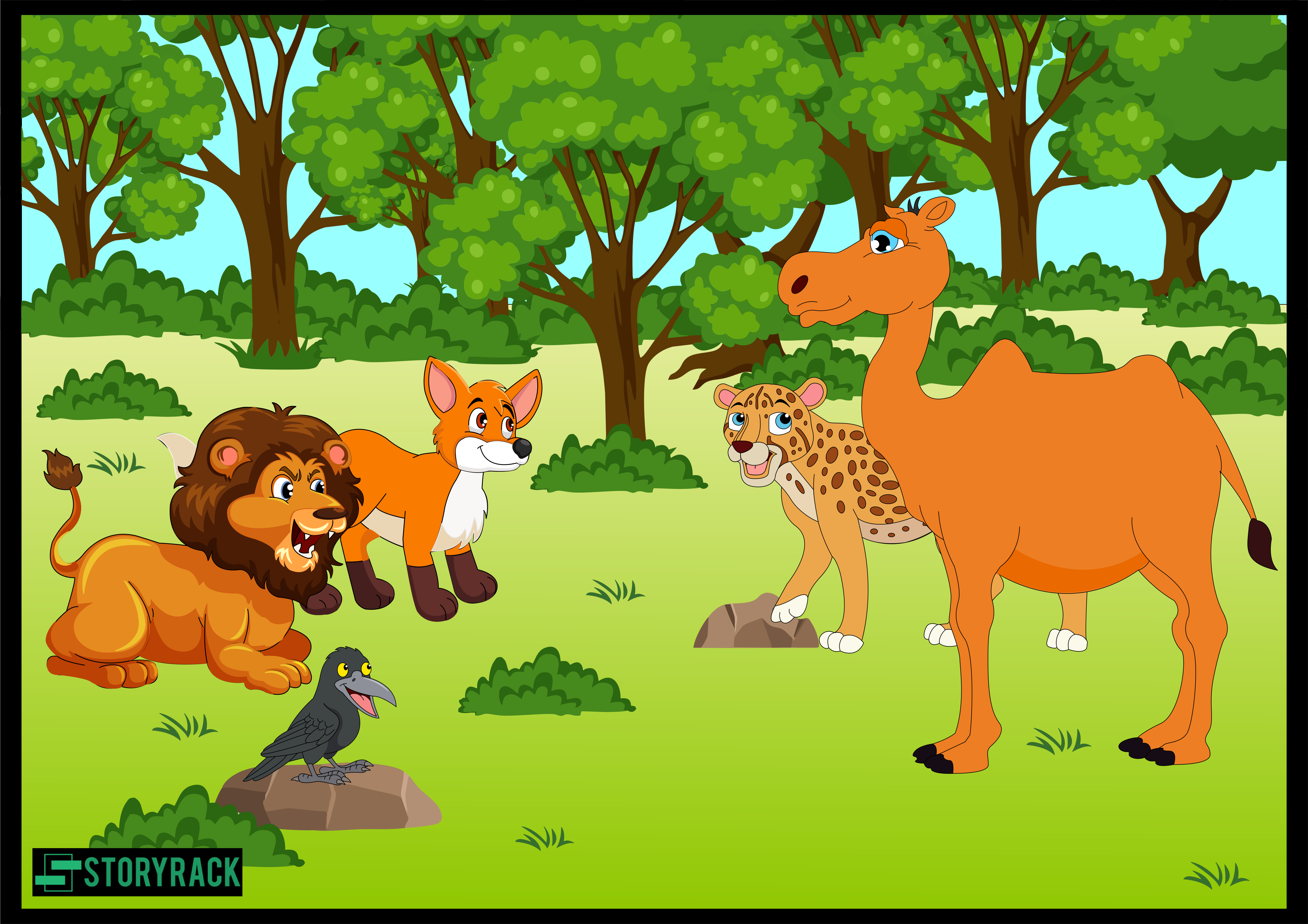 The lion was the king of the forest. He had three servants the leopard, the fox and the crow.

One day, a camel wandered into the forest. When the lion saw the camel, he said, “Who is this animal? Does he belong to the forest? Or the town? Go at once and find out about him.”

The crow said, “Ah! This is a camel. He lives in the town. You can kill him and eat him up.”

The lion said, “I cannot kill my guest. No promise is greater than the promise of safety. Give the camel the assurance of his safety and bring him to me.”

The servants went to the camel and after assuring him of his safety, they presented him before the lion. The camel narrated his tragic tale to the lion. The lion said, “Dear camel! You need not go back to the town. You need not carry heavy loads or lead your life as man’s slave. This forest is full of soft grass and lush green trees with tender leaves. You may live here.”

The camel thought that there was no danger to his life and so he began to lead a happy life in the forest.

One day, a huge elephant came into the forest. There was a terrible fight between the lion and the elephant. The lion was badly wounded. Now he could not even walk on his own.

The lion said to his servants, “Bring an animal here so that I can kill him and we can all eat him us.”

The servants searched all over the forest. But they could not find even one animal who was silly enough to be the lion’s prey willingly.

The fox went to the lion and said, “Master, we searched all over the forest, but we could not find any animal. If you agree, we can kill the camel and satisfy our hunger.”

The lion was furious to hear this. “Shame on you! You sinner!” roared the lion angrily. “If you dare to utter these words again, I will kill you. How can I kill the camel whom I have promised safety?”

The clever fox said, “I agree that it is a sin to kill the one whom you have promised safety. But master, if the loyal camel offers himself as your prey, it is not a sin.”

The hungry lion said, “In that case, you may do as you wish.”

The fox quickly went to the and whispered other servants something in their ears. He then went to the camel and said, “Our king is wounded and he cannot walk. He cannot even hunt his prey. He is starving to death. We are going to see him. Please come with us.”

All of them went to the lion.

The crow said, “Master, we could not find a prey for you. So I request you to kill me and satisfy your hunger. This sacrifice will find me a place in heaven. It is said that the one who lays down his life for his master goes to heaven.”

Hearing this, the fox, “Even if the master kills you, he cannot fill his stomach by eating a small bird like you.”

Then bowing to the lion, he said, “Master, please kill me and eat me up.”

The leopard at once interrupted and said, “No, master. The fox belongs to the family of dogs. Besides, he has nails on his paws. It is not right to kill an animal with nails.”

Bowing to the lion, the leopard said, “Master, kill me, eat me up and assure my place in heaven.”

Hearing these animals, the camel thought, “Each of these animals offered himself as the lion’s prey, but the lion did not kill anyone. Now let me also offer to lay down my life so that I can become the lion’s pet.”

The camel said to the leopard, “Friend, you are right. But ever you have nails on your paws. So how can the master eat you?”

The camel then came forward.

He stood before the lion, bowed to him and said, “O master! You may kill me and satisfy your hunger. This will assure my place in heaven.”

As the camel was saying this, the leopard and the fox pounced on him. The camel fell down and tossed about with pain. At last, the innocent camel died.