A handful of grain 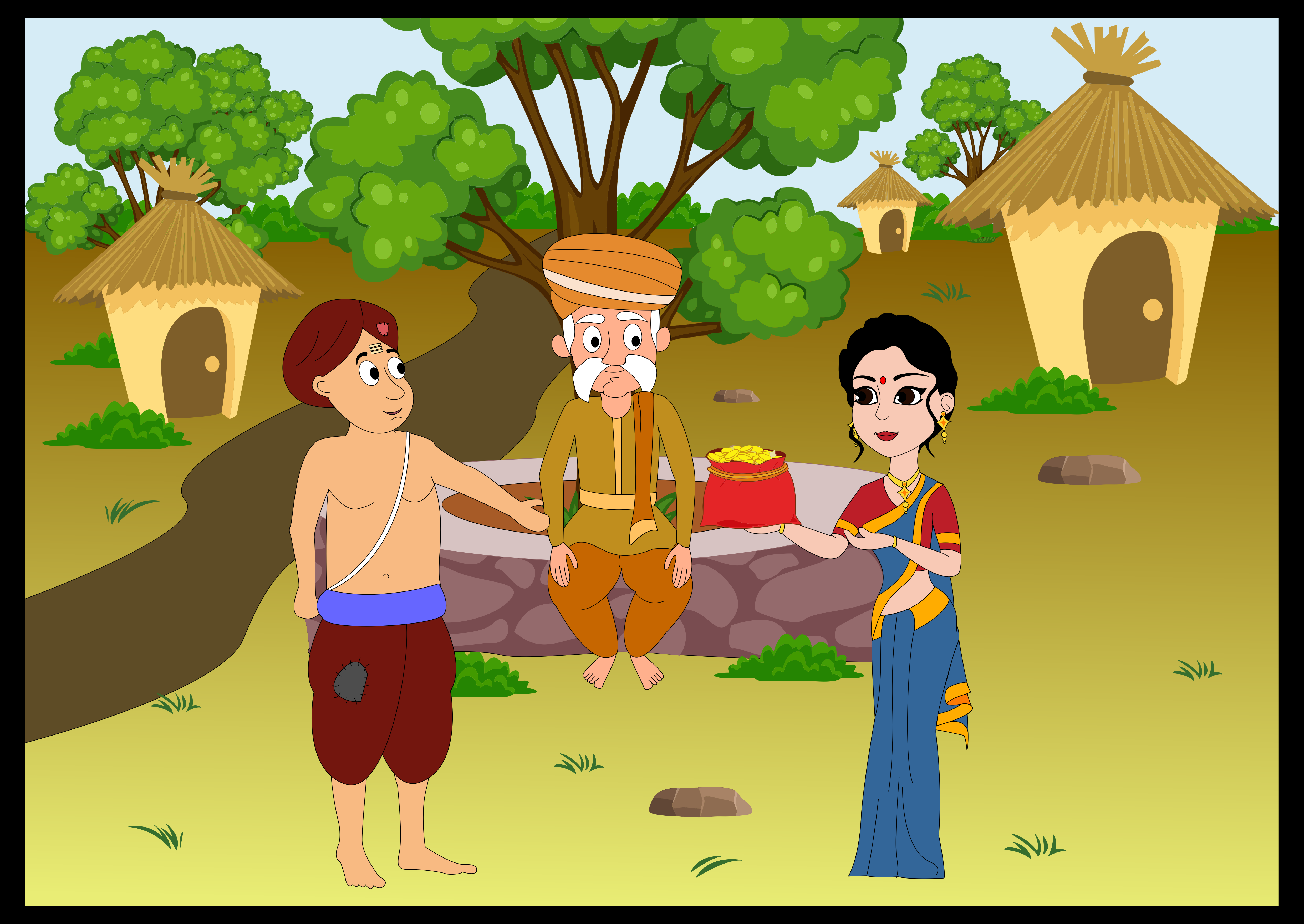 Simhapuri was one of the major towns in the Vjaya Nagar kingdom. In this town, there lived a beautiful lady called Vidyullatha. This lady was famous for her beauty and skills which she possessed in dance, music, prose and poetry.

One fine morning, as people passed by Vidyullatha’s house, they noticed a sign board that read, “One Thousand Gold Coins Will Be Gifted to Those Who Can Win with the Lady of the House in Wit, Poetry and Intellect. This sign board became a prestigious issue for most of the scholars and poets in town. Everyone wanted to confront Vidyullatha and win the one thousand gold coins.

Many people tried to meet the challenge but nobody could defeat the lady. This went on for days without end till people started losing hope of ever defeating her. One day, Vidyullatha heard a firewood vendor selling firewood right outside her house.

“Firewood, strong firewood for sale,” yelled the vendor, at the top of his voice. He stood outside her house and kept on shouting the same thing over and over again till Vidyullatha got annoyed by his yelling and went barging out of the house. She then yelled back at the firewood vendor, saying, “Stop it and tell me how much will a load of firewood cost?”

The vendor put down his load and sakd. will not sell this for money madam. I will sell the entire load if you give me just a handful of grain.”

Irritated at the vendor. Vidullatha said. “I heard you. Now just dump the load in the backyard and come here.”

The firewood vendor stressed again, “Madam, please remember I just want a handful of grain. I will not bargain for anything else.

Fuming, the lady said, “You may be deaf but I am not. You fool, come here fast and take what you want.”

Unloading the entire heap of firewood in the backyard, the vendor returned to her doorstep and said, “Madam, I don’t want you to make a mistake. I just want a handful of grain and nothing more or less. If you are not able to pay for it, you will have to give me one thousand gold coins and you will also have to tear out the hoarding outside your house.”

What nonsense?” said Vidyullatha in anger!

“It’s not nonsense, madam. You promised a price for the load of firewood and if you cannot keep your word, you will have to do as I say,” the vendor replied.

Vidyullatha was irritated and so was the vendor. Both argued till huge crowds gathered and wondered why a rich and an intelligent lady like her was fighting with a poor vendor. Finally, the two decided to go to court.

When they came before the judge, Vidyullatha said, “My Lord, this man is crazy. I agreed to pay him a handful of grain for the entire load of firewood. But he insists that if I cannot give him what he wants, that is, a handful of grain, then I should give him one thousand gold coins. I seek justice.”

The vendor then spoke up. “My Lord, what she is saying is correct. I just wanted her to be clear,” the vendor said humbly.

Vidyullatha was outwitted by a vendor. Accepting defeat, she went back home giving the vwendor one thousand gold coins. The hoarding was also removed and the entire town of Simhapuri rejoiced at Vidyullatha’s defeat to a firewood vendor.

Nobody however, came to know that the firewood vendor was none other than Tenali Rama who had been sent by the king to end the contest started by Vidyullatha.