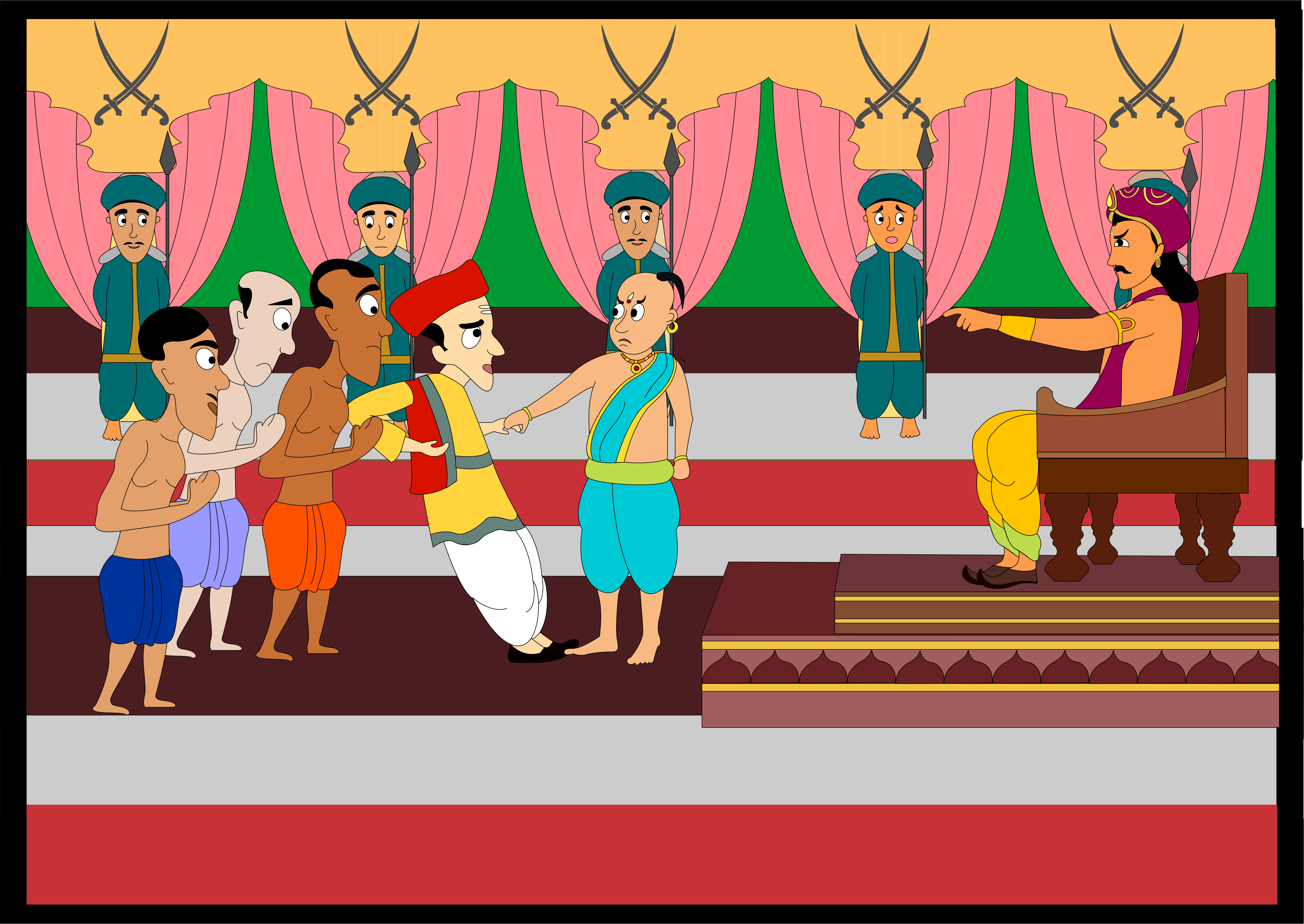 One morning, as King Krishna Deva Raya of the Vijaya Nagar Kingdom was sitting with his courtiers and ministers at court, a servant came forth and begged to meet the king.The servant’s name was Ramu and he had travelled far to meet the king.

“Your Majesty, I have come to seek justice,” cried Ramu. The king asked Ramu to narrate his story.

“It was a hot day and…” started Ramu. “Cut it short!” yelled the king.

I was accompanying my master to town one day. A sudden dust storm arose and we had to take shelter in an old temple,” sad the servat, as he was trying to hurriedly tell his tale.

“And then, all of a sudden, I saw a blue purse lying on the ground. So, I picked it up, opened it and found sparkling diamonds inside!” continued the servant.

“What next?” asked a minister, who was enjoying the story.

“I showed them to my master and asked hirn if we should give it to the king, but he asked me to keep quiet about it.”

“What did you do with the diamonds?” asked another minister

“My master said that we should go back home and divide the diamonds among ourselves, but he never gave me my share. So, I have come to you for justice.”

The king, determined to get to the bottom of this, immediately summoned Ramu’s master to the court. The master came along with three witnesses. The master said, “Your Majesty, I sent Ramu to deposit the diamonds at the state treasury and show me the receipt when he returned. But he came and complained to you. If he has not deposited the diamonds he should be punished.”

“We do not have proof against either of them,” thought Tenali Rama. Then he took some time to think and said “I have a plan, but both of you will have to hide behind this curtain for a few minutes.’

The king agreed and Tenali Rama started interrogating the three witness one by one.

He asked the first witness, “Did your master give Ramu the diamonds in front of you?” “Yes, Your Majesty,” said the witness

“Do you know the colour of the diamonds?” he asked the trembling witness.

“I just remember that the purse was blue, Your Majesty,” said the witness

Then, telling him to stand aside, Tenali moved on to his second witness

“Did your master give Ramu the diamonds in front of you and can you tell me the colour of those diamonds?”

“Yes, Your majesty. They were red,” he replied looking at the first witness.

Finally. Tenali asked the third witness, “Did your master give Ramu the diamonds in front of you and if yes do you remember the colour of the diamonds?”

“They were white. Your Majesty,” he replied glaring at the first two trembling witnesses

Hearing this, the king pushed aside the curtain and realised who the culprit was. He screamed at the witnesses for conspiring against Ramu and helping his master. The four were then put behind bars and the servant, Ramu was set free.

And then, he thanked Tenali, for they would have never nabbed the diamond theif if not for him.