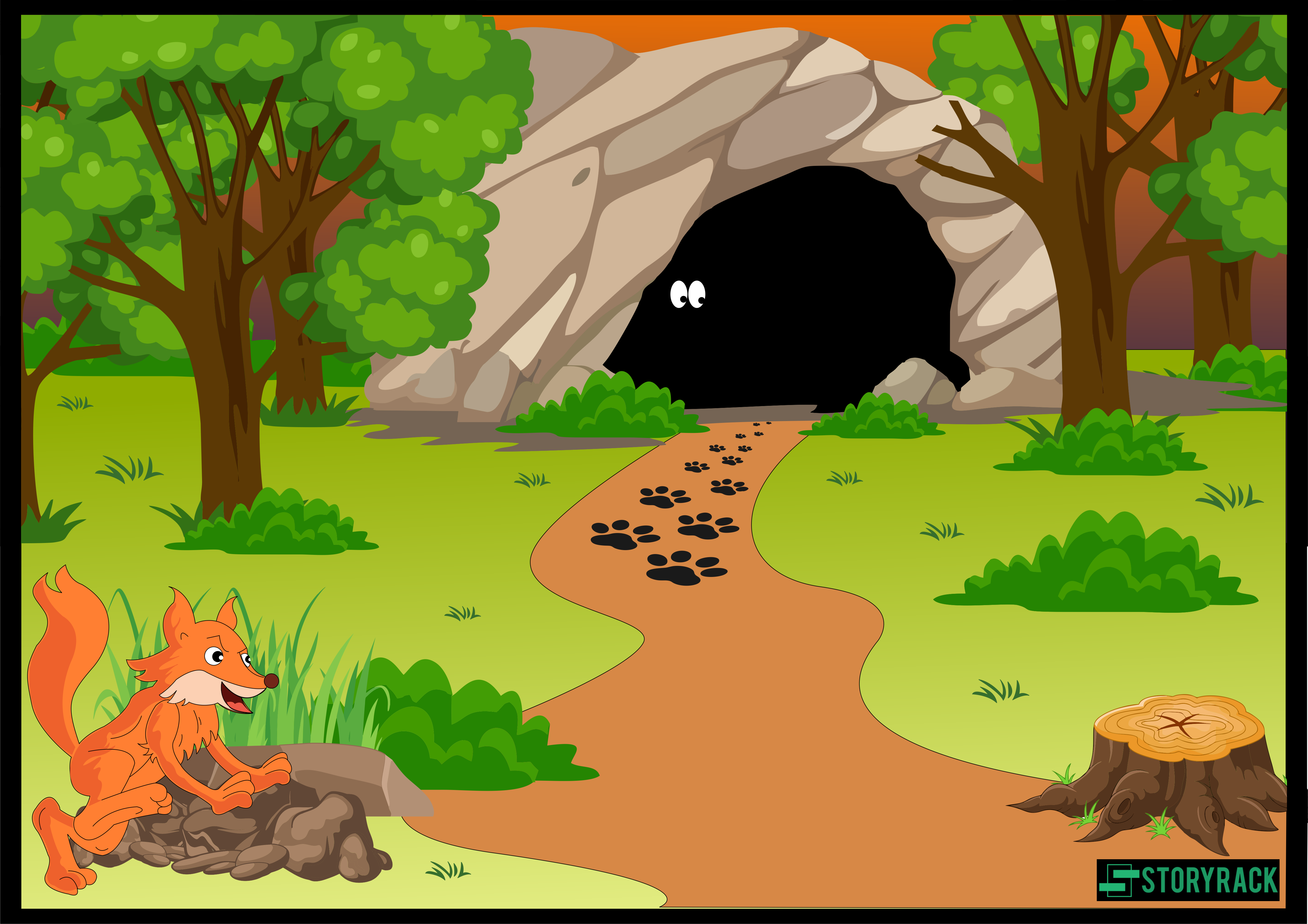 There lived a lion in a forest.

One day, the lion wandered the whole forest, but he did not find any prey. Soon he was tired.

The sun was about to set, but the lion still could not find a prey. “Oh! I had to fast today. Never mind,” said the lion, with a deep sigh, trying to console himself.

As the lion was returning to his cave, he saw another cave.

“Ah! Let me go and see if I can find a prey in that cave,” thought the lion, as he walked into the cave.

But the cave was empty.

Suddenly, he had an idea. He thought, “The sun is about to set The animal, which lives in this cave, should come here soon. Let me hide inside the cave. I will get a prey without any effort. That should satisfy my hunger.”

Thinking this, the lion hid himself inside the cave and waited for the animal to come.

The cave belonged to a fox.

After some time, the fox came there. The fox is a clever and cunning animal. As he walked he looked towards the cave, around cautiously, pricked his ears to hear the slightest sound and twitched his nose to smell an animal.

Even in the faint light of the setting sun, the fox spotted some marks on the ground.

“Ah! The footprints of a lion,” said the fox, surprised.

“These footprints lead to the cave. But there are no footprints coming out of the cave,” thought the fox. “This means that the lion is still inside, waiting for the prey to enter the cave. It was a good thing that I came nightfall. Had I come here late, I would not have spotted the lion’s footprints.”

The fox thought of a plan. He shook his tail happily and said, “O cave! O cave!”

Having said this, the fox remained quiet for some time.

Once again, the fox said, “O cave! O cave! Why are you quiet today? Every day, when I call you, you greet me saying:’Welcome friend! How was the day?’”

The lion, who was hiding inside the cave, thought, “I think the cave must be welcoming the fox with these words every day But today, my presence here has frightened it and so it does not open its mouth. Let me speak instead of the cave.”

“Welcome friend! How was the day?” said the lion as softly as he could.

But a lion can never supress his majestic voice. The cave echoed with his voice. All the animals living in the surrounding area were alerted by his roar.

The lion thought that the fox would enter the cave. But he heard the fox saying, “O lion, can a cave ever talk? Well, goodbye.”

The lion peeped out of the cave.

He saw the fox running away to save his life.