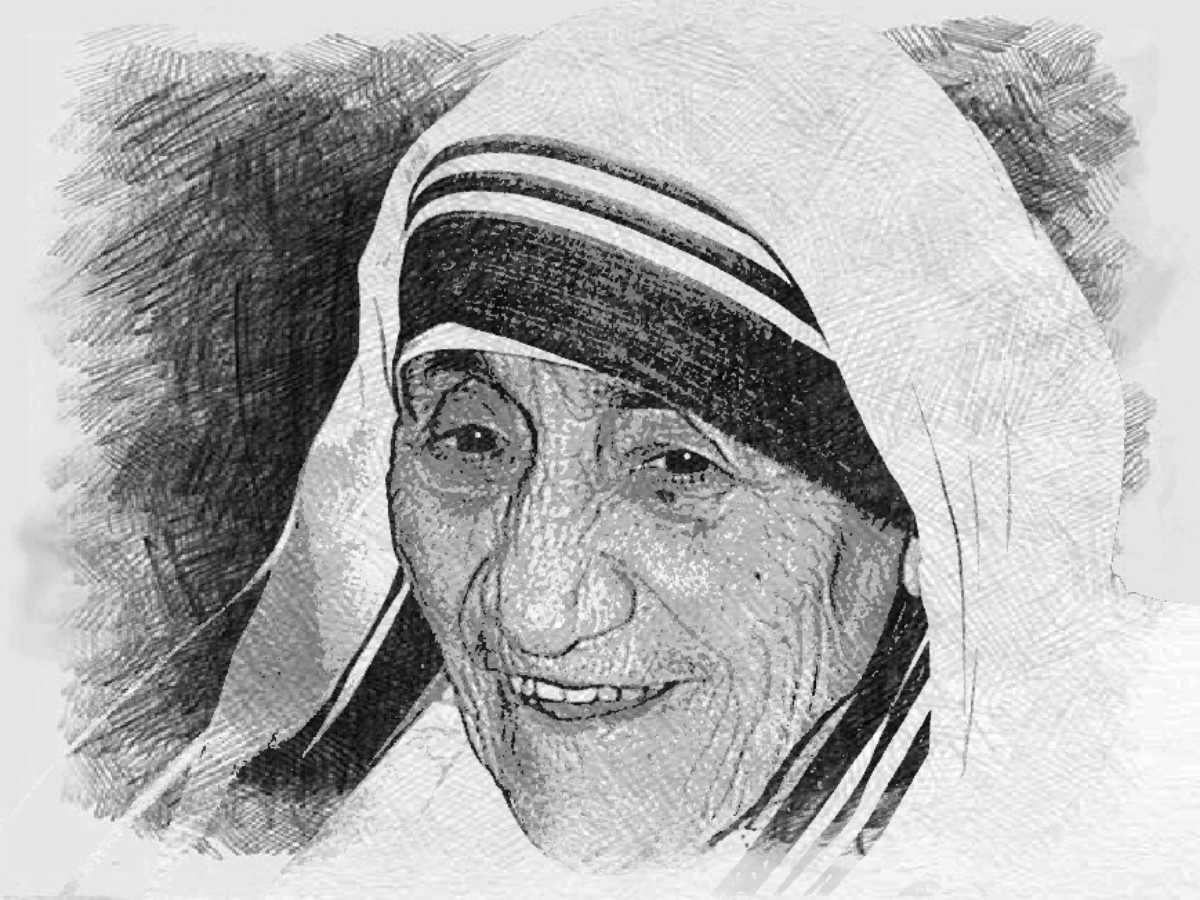 “It’s not about how much you do, but how much love you put into what you do that counts.”

“If we have no peace, it is because we have forgotten that we belong to each other” said a great lady, who devoted her entire life for spreading love and serving people. She was a nun and the founder of the Order of the Missionaries of Charity, a Roman Catholic congregation of women dedicated to helping the poor. Considered one of the 20th Century’s greatest humanitarians, she was canonized as Saint Teresa of Calcutta in 2016. She none other than Mary Teresa Bojaxhiu commonly called Mother Teresa, and known in the Roman Catholic Church as Saint Teresa of Calcutta

She was born on 26 August 1910 an Albanian-Indian. She was born in Skopje (now the capital of North Macedonia), then part of the Kosovo Vilayet of the Ottoman Empire. After living in Vardar Macedonia for eighteen years she moved to Ireland and then to India, where she lived for most of her life. Teresa was born Anjezë Gonxhe (or Gonxha) Bojaxhiu (Albanian: Anjezë is a cognate of “Agnes”; Gonxhe means “rosebud” or “little flower” in Albanian). She later considered 27 August, the day she was baptised, her “true birthday”.

She was the youngest child of Nikollë and Dranafile Bojaxhiu (Bernai). Her father, who was involved in Albanian-community politics in Ottoman Macedonia, died in 1919 when she was eight years old. He may have been from Prizren, Kosovo, and her mother may have been from a village near Gjakova.

According to a biography by Joan Graff Clucas, during her early years Teresa was fascinated by stories of the lives of missionaries and their service in Bengal; by age 12, she was convinced that she should commit herself to religious life. Her resolve strengthened on 15 August 1928 as she prayed at the shrine of the Black Madonna of Vitina-Letnice, where she often went on pilgrimages.

Teresa left home in 1928 at age 18 to join the Sisters of Loreto at Loreto Abbey in Rathfarnham, Ireland, to learn English with the view of becoming a missionary; English was the language of instruction of the Sisters of Loreto in India. She never saw her mother or her sister again. Her family lived in Skopje until 1934, when they moved to Tirana. Her first vows:

She arrived in India in 1929 and began her novitiate in Darjeeling, in the lower Himalayas, where she learnt Bengali and taught at St. Teresa’s School near her convent. Teresa took her first religious vows on 24 May 1931. She chose to be named after Thérèse de Lisieux, the patron saint of missionaries; because a nun in the convent had already chosen that name, Agnes opted for its Spanish spelling (Teresa).

Teresa took her solemn vows on 14 May 1937 while she was a teacher at the Loreto convent school in Entally, eastern Calcutta. She served there for nearly twenty years, and was appointed its headmistress in 1944. Although Teresa enjoyed teaching at the school, she was increasingly disturbed by the poverty surrounding her in Calcutta. The Bengal famine of 1943 brought misery and death to the city, and the August 1946 Direct Action Day began a period of Muslim-Hindu violence.

In 1950 Teresa founded the Missionaries of Charity, a Roman Catholic religious congregation which had over 4,500 nuns and was active in 133 countries in 2012. The congregation manages homes for people dying of HIV/AIDS, leprosy and tuberculosis; soup kitchens; dispensaries and mobile clinics; children’s- and family-counselling programmes; orphanages, and schools. Members, who take vows of chastity, poverty, and obedience, also profess a fourth vow: to give “wholehearted free service to the poorest of the poor.”

A controversial figure during her life and after her death, Teresa was admired by many for her charitable work. She was praised and criticised for her opposition to abortion, and criticised for poor conditions in her houses for the dying. Her authorised biography was written by Navin Chawla and published in 1992, and she has been the subject of films and other books. On September 6,2017, Teresa was named co-patron of the Roman Catholic Archdiocese of Calcutta, alongside St. Francis Xavier.

When she was asked how to promote world peace, she replied,

“Go home and love your family”.

Teresa received a number of honours, including the 1962 Ramon Magsaysay Peace Prize and 1979 Nobel Peace Prize. She was canonised (recognised by the church as a saint) on 4 September 2016, and the anniversary of her death (5 September) is her feast day.

Over two decades of her life, Mother Teresa suffered various health problems, but nothing could dissuade her from fulfilling her mission of serving the poor and needy. Until her very last illness she was active in travelling around the world to the different branches of The Missionaries of Charity. During her last few years, she met Princess Diana in the Bronx, New York. 13 March 1997 Teresa resigned as head of the Missionaries of Charity, and she died on 5 September. At the time of her death, the Missionaries of Charity had over 4,000 sisters and an associated brotherhood of 300 members operating 610 missions in 123 countries. These included hospices and homes for people with HIV/AIDS, leprosy and tuberculosis, soup kitchens, children’s- and family-counselling programmes, orphanages and schools. The Missionaries of Charity were aided by co-workers numbering over one million by the 1990s.