To Whom Does The Hollow Belong

To Whom Does The Hollow Belong 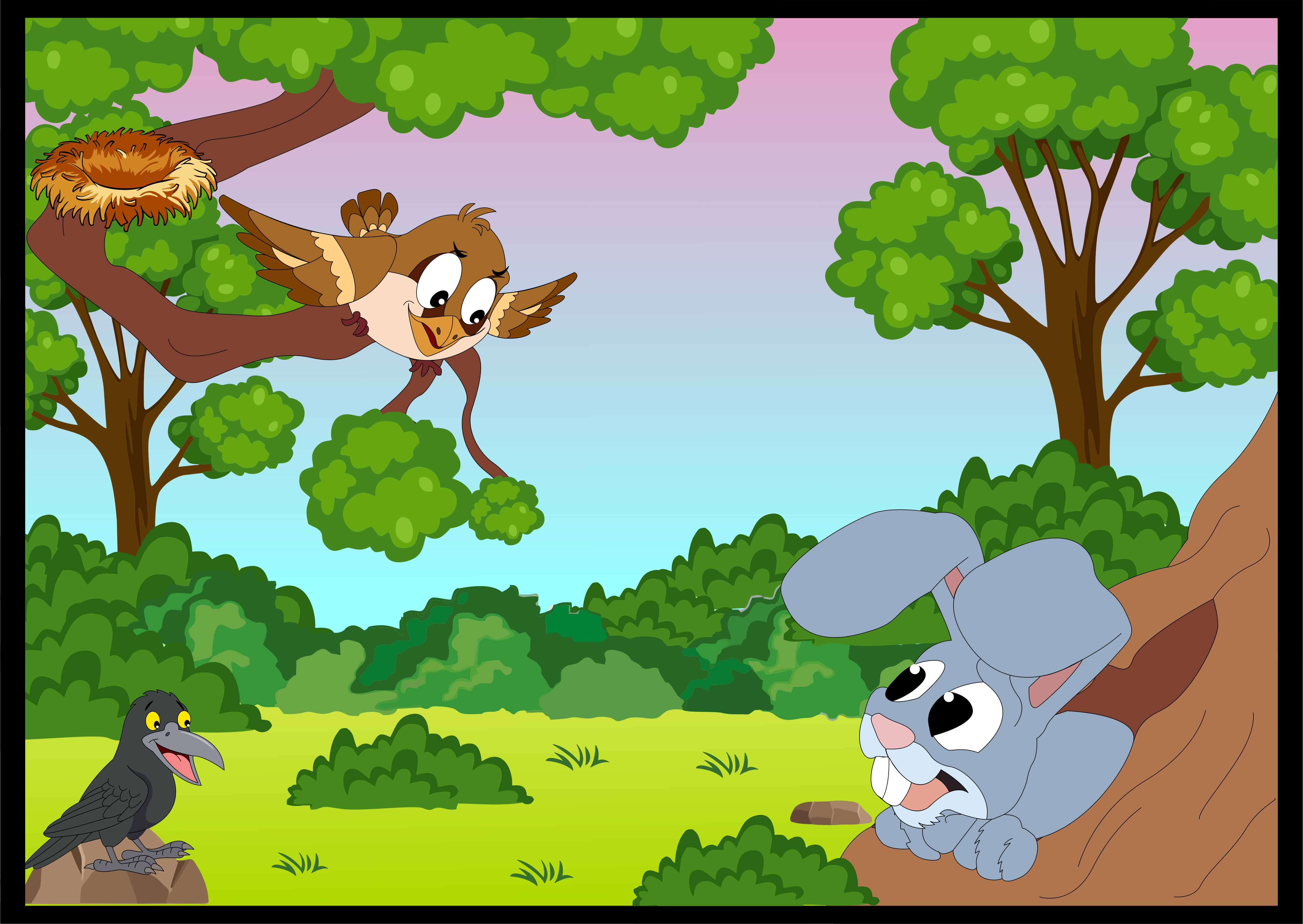 In the hollow of the trunk of a big tree, there lived a sparrow.

A crow also had built his nest in that tree.

One morning, the sparrow said to the crow, “I have heard that a nearby village has reaped a rich harvest this year. I have decided to go there. I will happily eat the grains of corn and return in the evening.”

Having said this, the sparrow flew towards that village.

The sparrow did not return even after sunset. The crow was worried about him. “What could have happened to the sparrow?” wondered the crow. “I hope he is fine. I hope he is not caught in a hunter’s net. Perhaps he has decided to stay there and enjoy himself.”

Many days passed. But the sparrow did not come back. Now the crow gave up the hope of ever seeing the sparrow again.

One day, a wandering rabbit came to the tree where the crow lived. He noticed the nice litte hallow in the trunk of that tree.

Meanwhile, the sparrow was enjoying himself eating plenty of grains of corn. But soon he began to feel homesick. After a few days, when he returned to the tree, he looked healthier than before.

The sparrow was about to enter his hollow. But what did he see inside? A big white rabbit!

“Hey! This is my hollow,” said the rabbit. “I have been living here for a long time.”

The sparrow said,” I used to live here and so this hollow belongs to me.”

The sparrow and the rabbit argued for a long time. There appeared to be no end to their arguments.

At last, the, rabbit said, “Let us go to someone who is righteous and ask him to give us justice. We will respect his judgment. The one who wins will live in the hollow.”

A cat had been overhearing the arguments between the sparrow and the rabbit. At once, she took a rosary in her hand and began to say her prayers. She closed her eyes and chanted loudly,

“I do not desire any material comforts. I only wish to chant the name of the Lord.”

The rabbit said, “This cat appears to be righteous. Let us go to her for justice.”

The sparrow said, “The cat is our enemy. We cannot even think of going near her.”

“All right. We will not go near her,” said the rabbit.

The sparrow stood at a distance and bowed to the cat.

The cunning cat said, “Huh! What did you say? A little louder please. I cannot hear properly.”

The sparrow wanted to test the cat. He wanted to find out whether the mention of a prey excited her.

“We want you to give us justice.” said the sparrow loudly. “You may kill and eat the one who is guilty.”

The cat pretended to be shocked. “O God! O God! What are you saying?” she said. “I have given up hunting. I believe in non-violence. That is my way of life. Trust me. Come closer to me andtell me what your problem is. What are you arguing about? Tell me.”

The rabbit trusted the cat and so he went near her. The sparrow however, stood at a distance. The cat said, “Do not fear me. I cannot hear clearly, you know. I think I am going deaf. But please come closer and tell me in my ear. I wilL be able to give justice only if can hear correctly and clearly.”

The rabbit went close to the cat and loudly narrated the whole story in her ear.

Now the sparrow gathered Courage and went closer to the cat. But before he could begin his story, the cat’s big paws fell on the tiny sparrow. And, before the rabbit could realize what was happening, the cat caught him by the neck.

The cat enjoyed feasting on the sparrow and the rabbit.

She then began to live happily in the empty hollow.