Mahesh Das and the Sentry 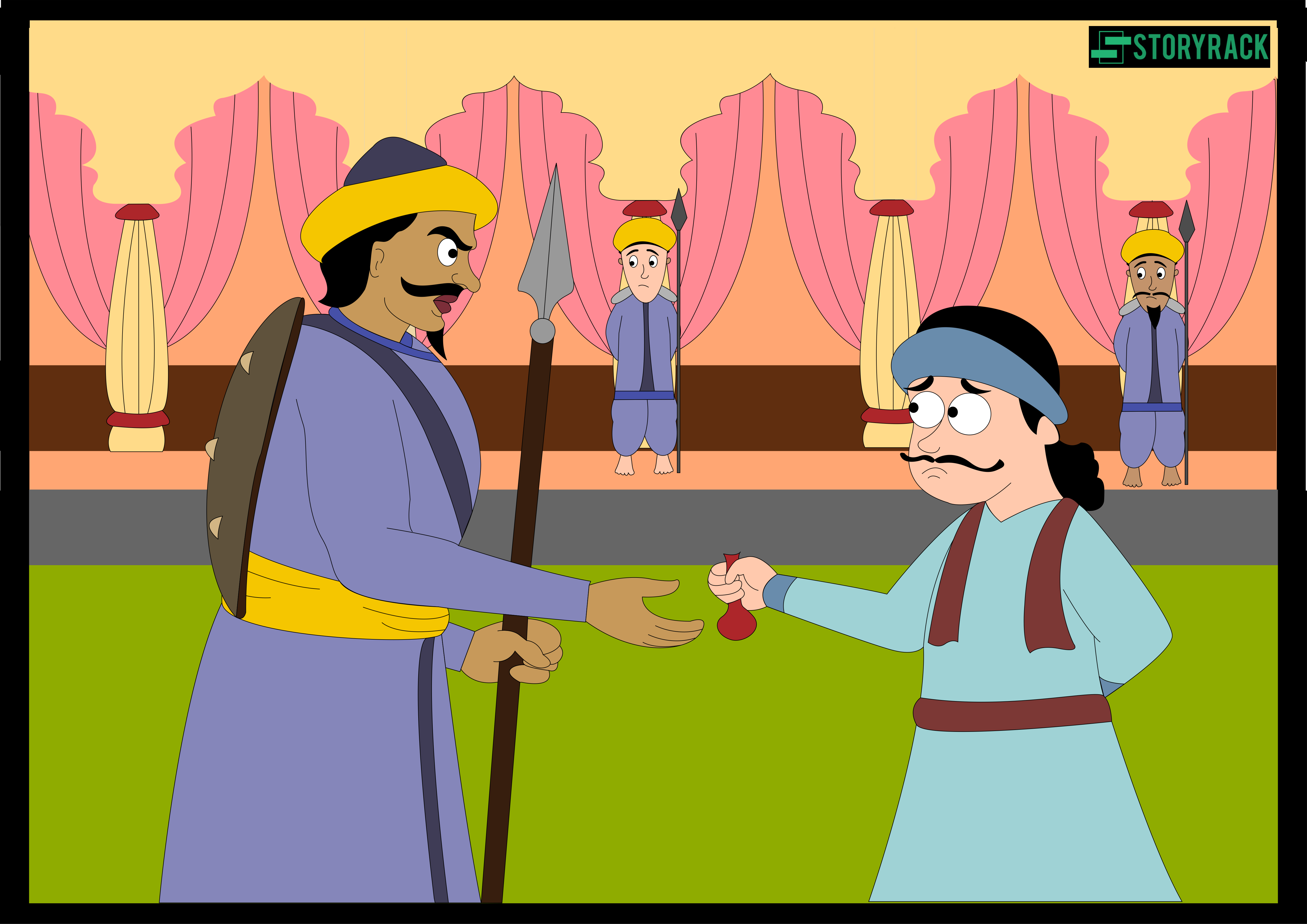 When Mahesh Das finished his studies, he decided to go to Agra and meet the emperor. On reaching Agra, he was dazzled by its huge havels and the bustling bazar. These sights were new to him, as he had spent his entire life in a poor village.

Mahesh Das had the king’s emerald ring with him. It was nearly evening when he arrived at the king’s fort.

It was a massive and grand fort located on the banks of the River Yamuna. The fort was quarded by tierce-looking sentries with spears in their hands.

Mahesh Das went up to one of the soldiers and told him that he had been invited by the emperor.

The soldier looked at the dusty villager in front of him and said mockingly, “The emperor of Hindustan would like to meet you!”

“Maybe,” said Mahesh Das boldy, though he felt quite scared “Here I have the emperor’s ring to prove it,” he added, taking out the ring which the emperor had given him.

The guard looked at him doubtfully.

That is no ordinary ring,” said a pundit, who had stopped to watch, “you should let this man go in.”

The guard agreed but only if Mahesh Das promised to share the gift that the emperor would give him.

Mahesh Das agreed at once and the guard let him in. The emperor was in the Diwan-i Aam.

The palace was grand with rich carpets on the floor and intricately carved patterns on the walls. The emperor sat on a platform at the far end of the hall.

Bowing low, Mahesh Das carefully made his way towards the throne. The courtiers in the hall wondered who he was.

The emperor immediately recognised him. He asked him to come forward and make a wish.

“Your Majesty, I just want to be given fifty lashes,” he requested.

“Is he a madman?” the courtiers whispered among themselves.

But the emperor liked his straightforward manner and asked him the reason behind the request.

Your Majesty,” replied Mahesh Das, “the sentry at the gate allowed me into the fort only if I agreed to one condition - that I give him half of the gift that I receive from you. I am ready to bear twenty five lashes in order to share it with the guard.”

Akbar was enraged when he heard this. “Bring this greedy guard to me who keeps my subjects away from me!” he thundered. The guard was immediately brought before the king.

The king sentenced the guard to the entire fifty lashes. Never again did the sentry to bully poor people who came to meet the emperor.

The emperor was impressed with the quick wit and intelligence of Mahesh Das. He decided to give hima place in his court. He also conferred the title of ‘Raja Birbal’ on him. This is how Birbal became a part of Akbar’s court.